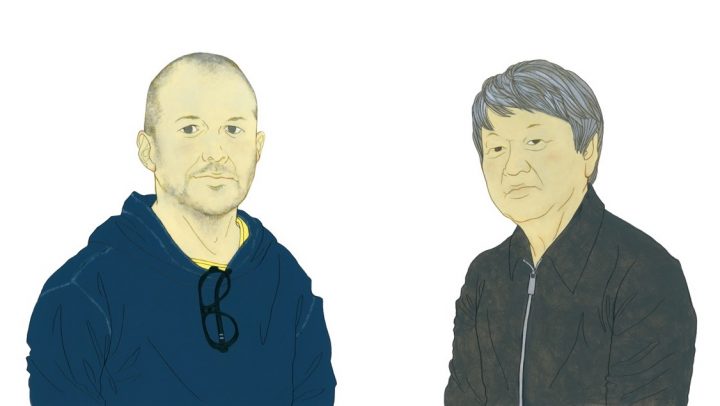 In the summer of 2018, Apple became the world’s first corporation to exceed one trillion dollars in market capital. It is encouraging for the design industry to realize that a design-centered company is at the top of all listed companies. The current design-centered approach by Apple was established by its late co-founder, Steve Jobs, and Chief Design Officer, Jonathan Ive. 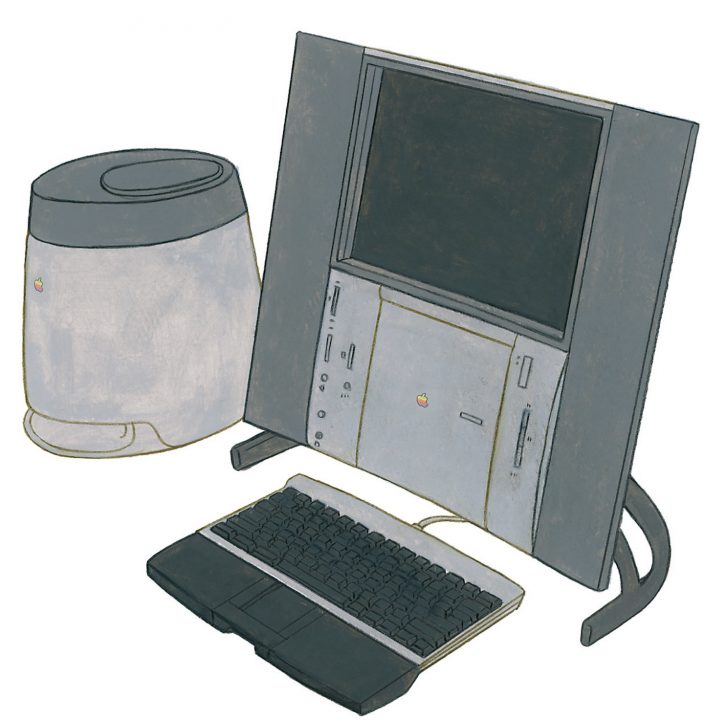 ▲The Twentieth Anniversary Macintosh (TAM) (code name: Spartacus) commercialized in 1997. It was a joint effort by Ive, Fukasawa, and Robert Brunner who was head of Design Department at Apple at the time.
Illustrations by Chiaki Takasugi

For the past three years, Ive has been away from product development to pour all his energy into completing the new Apple headquarters. After the site had been completed in 2018, Ive returned to product development.
I, the author of this article, had the honor of interviewing Ive right after the introduction of the original iMac in 1998. I asked how the young talented designer was interested in designing cellphones or cars. Ive replied evasively, “The urgent task is to stabilize Apple’s finances. Right now, I need to concentrate on making the iMac a success.” But when I asked who his favorite Japanese designer was, he immediately answered, “Naoto Fukasawa!”

In the latter half of 1990s when Fukasawa was still at ID Two (now known as IDEO) in San Francisco, he was invited to Apple and designed the “20th Anniversary Mac” (code name ‘Spartacus’) along with Ive. Nearly 20 years later, the two names resonated again when Ive made the purchase decision for several thousands chairs designed by Fukasawa. 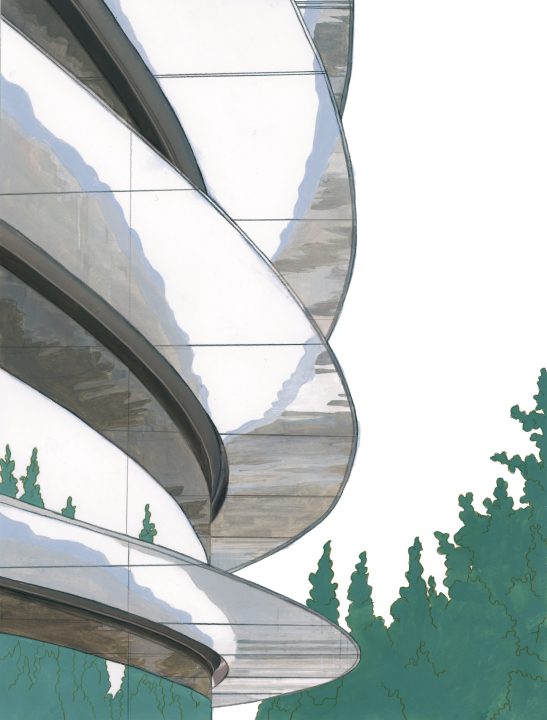 ▲Apple Park. The compound with gentle undulations and greenery that offers appreciation for the changing seasons is more like a natural park. An expansive parking lot is located in the basement of the building.
Illustrations by Chiaki Takasugi

“Have you been to Apple Park, yet?” Ive asks.
“No, I haven’t,” Fukasawa responds. “But quite a few of my friends like Konstantin Grcic and Tim Brown had. And they told me the details of the architecture are as beautiful as the MacBooks.”

Apple Park is the name of Apple’s new headquarters, which Ive designed along with the architectural design office Foster + Partners.
“On one level there were a couple of quite esoteric goals,” Ive explains. “One was to have a connection with a community of people.” In a building with 9,000 employees, their movement tends to be vertical, and their connection tends to be in the elevator. Ive encouraged horizontal flows by configuring the office space into a donut shape with four floors.
“The employees start to get a sense of community of being part of a bigger thing,” Ive says. The other connection Ive placed importance on was the connection with “nature and the outside space.” 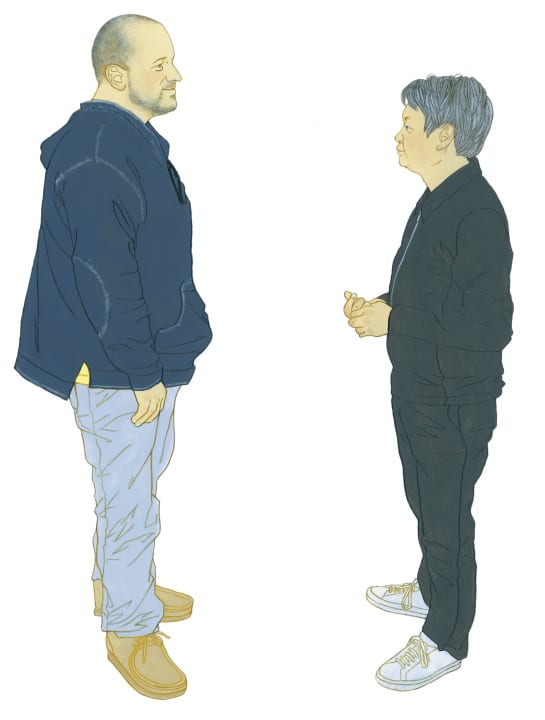 ▲“There’s been an extraordinary change in that 20 years. What do you think defines that change most conspicuously?” (Ive)
“I don’t think the role of the designer itself has changed so much.”(Fukasawa)
Illustrations by Chiaki Takasugi

Most of the headquarters are covered by green and looks like a natural park. When you move along the paths extending throughout the site on foot or by bike or cart, you see various facilities including the main building through the greenery. The donut-shaped main building is gigantic and the outer perimeter is an extensive 1.6 km. All its external wall is glass and louvers extend horizontally from the ceilings. This is why the office interior and exterior nature appear to be contiguous.

Just like many Apple products, the way Apple Park was made is interesting. Taking advantage of the round shape, only one of its segments is designed and the rest are repeated and connected.
“That means that you can put all of your energy into just one segment like a product,” Ive says.

Ive was deeply involved even in the method of construction on an equal footing with Foster+Partners. “One of the things that’s sad but inevitable is that in architecture you don’t get to build a full-sized model,” Ive reflects. “But we did that though. We were able to make full-size prototypes. Because the idea was just ‘being a repetition,’ you really have a sense of what you’re designing. What Foster + Partners can do and I can’t is to see and extrapolate by making full-size models and examine it from inside.”

“I’ve heard about you spending some time with your co-workers in the full-size experiment chamber,” Fukasawa replies. “I heard that the chair I designed was also delivered there.” 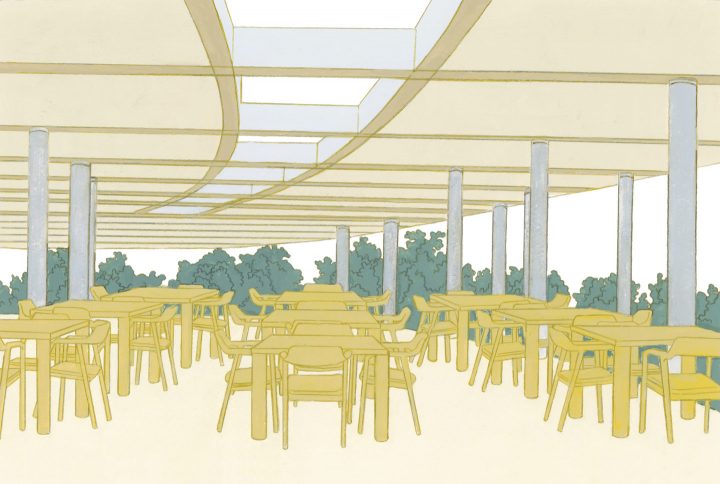 ▲Hiroshima chair designed by Naoto Fukasawa. It is used not only at the Apple Headquarters but also in special business meeting rooms in larger Apple retails.
Illustrations by Chiaki Takasugi

He is talking about the Hiroshima chair he designed for Maruni. Ive raves about this chair as Fukasawa’s most splendid and beautiful contribution to the main office, and gave the reason why he chose Hiroshima.

“One of the reasons we chose Naoto’s chair is that it straddles various archetypes from being the most beautiful dining chair to being something more informal.”
Ive then asked the designer, “How did you become the master of furniture? “

He continued, “I think history has a number of examples where a small group of people at a particular time and a particular place have an opportunity to make a contribution to the world.”

Ive and Fukasawa met for the first time in San Fransisco in 1992. “At the time, Naoto was already a unique and extraordinary figure, and had an immense influence on others,” Ive says.

Fukasawa returned to Japan in 1996 in time to establish IDEO Japan. Later in 2003, he established his own firm, Naoto Fukasawa Design. “After I returned from the US, I returned to the basics of design, such as the design of chairs. I wanted to do design of unchanging values. It’s not easy but it’s interesting.”
“It’s a traditional object in some ways, but the way that it’s made is totally new,” Ive adds.

Fukasawa calls the kind of design that even gives birth to the manufacturing method as “industrial craftsmanship.” He also points out that it is exactly what Ive is doing. Speaking of Apple products, general consumers are only interested in the appearance of the final products. But those in the design field are fascinated by how they manufacture them. Apple for the past decade has been very inventive and realized so many new methodologies—inconceivable through conventional thinking—in mass production using its abundant resources. One famous example is the use of high-precision cutting machines normally used for die finishing in the final fabrication stages. It will eventually get rid of substrates and embedded parts like chips in aluminum housings. The aluminum will be cut out from a solid block by combining a press stamp and cutting. 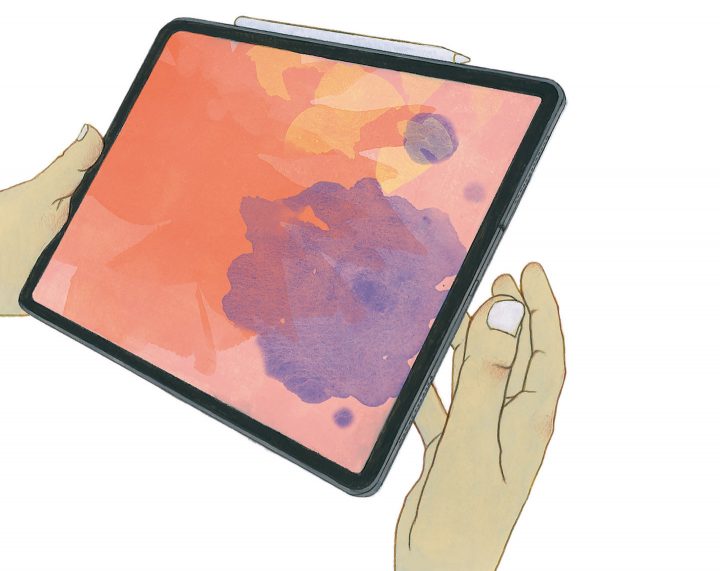 ▲The new iPad Pro released in October 2018 has a magnet to attach an Apple Pencil. The first item Ive handled at Apple was also a product design for housing a pen in 1992.
Illustrations by Chiaki Takasugi

“This is a method used in wristwatch industry,” Fukasawa explains. He says he already predicted all such design evolution at Apple. He predicted them as the “correct solution,” but could not realize it in form. “The next method will probably would be like sealing all the electronic parts into transparent amber. It requires molding and cutting technology for glass, but that’s exactly what Apple is doing with the iPhone recently.”

Fukasawa sees the outstanding strength of Apple in the very fact it has fused software and hardware.
“Although what Apple provides is software, it applied that concept into the symbol of hardware to get people to understand it easily,” Fukasawa says.

In an open interview in 2007, Steve Jobs once stated that Apple is essentially a software maker and it is simply covering the well thought-out software with the hide of beautiful hardware. The artisan is exactly who Jonathan Ive is.
“It’s interesting that although this product (iPhone) is far smaller and more integrated, it is somehow more flexible than the iMac,” Ive explains. 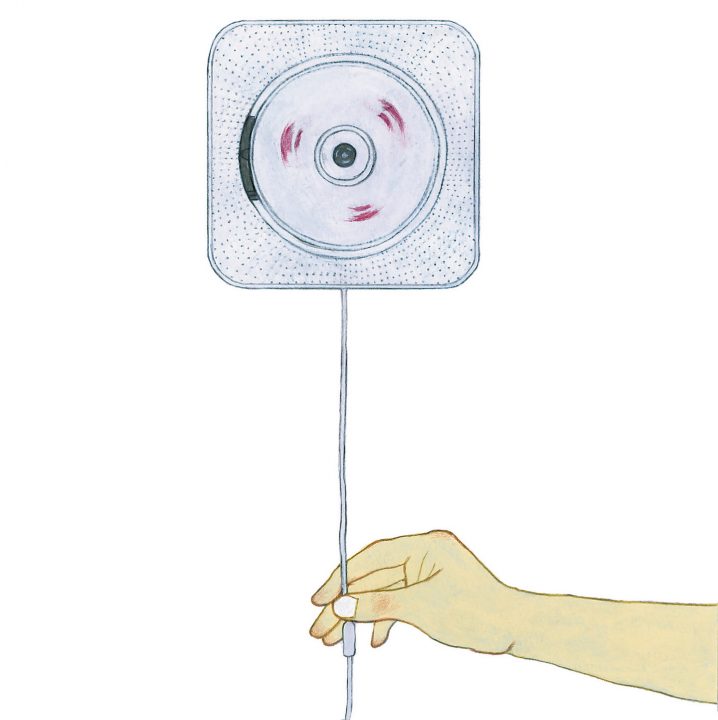 ▲The wall-hanging CD player designed by Naoto Fukasawa in a workshop called “without thought” for in-house designers was released from MUJI in 2000. The user can enjoy seeing the CD rotating inside, like a ventilation fan.
Illustrations by Chiaki Takasugi

Ive suddenly recalls the fusion of technology and design Fukasawa was once doing. “Naoto’s wall-hanging CD player from MUJI was such a resonant and significant product to so many people including us as a design team. It was a curious thing because it was a celebration of the actual media (CD).”
The iMac came out in 1998 and the wall-hanging CD player in 2000. Both are products that came out approximately 20 years ago.

Ive then poses a question to Fukasawa: “There’s been an extraordinary change in that 20 years. What do you think defines that change most conspicuously?”
“I don’t think the role of the designer itself has changed so much,” Fukasawa responds, “But, for example, you have changed its standards. For example, previously, our precision standard were at the 0.3 mm radius but you have chaged it to 0 mm. We now have to follow what you’ve done.”

Fukasawa says that the influence Apple has had on society in the past 20 years is immense not only in terms of design. How on earth could a single company keep turning out so many innovations?
“That’s one of the things that’s interesting in particular about Apple,” Ive says. “The company that was founded in the 70s had such clear values and such a clear reason for being, and the ideas were a culmination of those values. The products are a testament to those values. That’s why Apple contrasts starkly with a number of companies in our area in the valley. Because it had such a strong sense of values, it enabled and fueled decades of innovations. They’ve been innovations for reasons, and it hasn’t just been to do something different.”

“I think there was a strange momentum,” Ive reflects. “Courage and optimism are so necessary when you’re trying to make something that’s new, because by definition if it’s new there are 100 reasons why it shouldn’t exist. So there has to be a degree of resolve and faith, and I think that’s when momentum and some experience are really useful.” 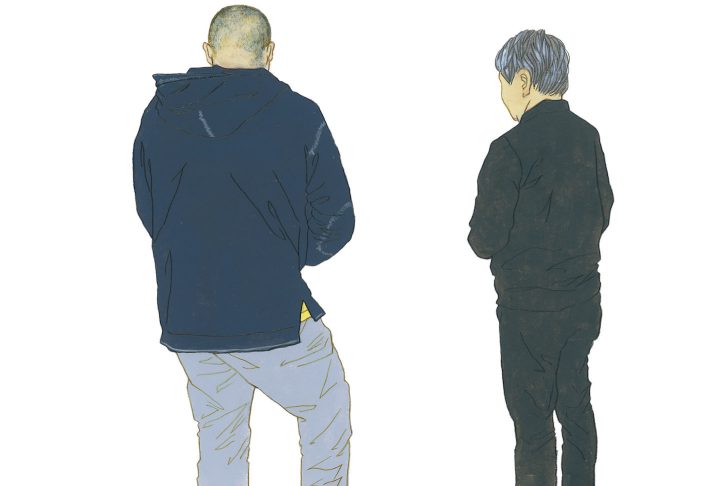 After the dialogue, I asked Fukasawa how Jonathan Ive has changed.
He replied. “He hasn’t changed and is still modest, intellectual, and has an immense curiosity for design, but he has grown into a special existence due to his situation. This is my own view, but I think people like Steve Jobs, Marc Newson, and Dieter Rams who encouraged him to further soar and rise were instrumental.”

Ive, later in 2018, was appointed Chancellor at the Royal College of Arts, and will pour his efforts into fostering future designers as well. When the two meet again in the future, they might be talking about design education. (Text by Nobi Hayashi)

This article is a reprint from the design magazine “AXIS” vol.197 (published in january 2019).